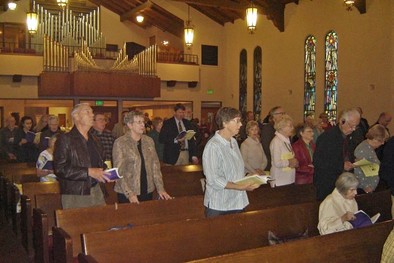 The Apostles' Creed as we now have it dates from the eighth century. But in truth its roots are in the “Old Roman Creed,” which was used in some parts of the ancient church as early as the third century. Before the Old Roman Creed, in turn, were variations rooted in the New Testament itself. While this creed does not come from the apostles (Jesus’ followers sent to share the good news), its roots are apostolic (in keeping with the teaching of the New Testament apostles). The creed describes the faith into which we are baptized and therefore is used in the rites of Baptism and Affirmation of Baptism.

I believe in God, the Father almighty, creator of heaven and earth.

I believe in Jesus Christ, God's only Son, our Lord, who was conceived by the Holy Spirit, born of the virgin Mary, suffered under Pontius Pilate, was crucified, died and was buried; he descended to the dead.* On the third day he rose again; he ascended into heaven, he is seated at the right hand of the Father, and he will come to judge the living and the dead.

I believe in the Holy Spirit, the holy catholic Church, the communion of saints, the forgiveness of sins, the resurrection of the body, and the life everlasting.

*or "he descended into hell," another translation of this text in widespread use.